Some months ago, I posted an alternative, more patriotic, capitalist State of the Union address – one that lovers of liberty and warriors against Statism would like. In it, I envisioned the President embracing true capitalism and offering solutions to wipe out the scurge of Socialism.  For those who may have missed that rambling screed, here it is.

But I am heartened to note that I am not the only one to have realized how widespread the infection of socialism was in this nation.  Specifically, I would like to commend Obion County, Tennessee, the city of South Fulton, and its mayor – the honorable David Crocker.  Thank you to ThinkProgress for alerting me to this story.

If I may recount to you a portion of my earlier entry, I noted the following;

“We don’t need a tax to support firefighting efforts. Private firefighting companies can and will allow patriotic Americans to only pay when they themselves have an applicable emergency. Most Americans go their entire lives with no occasion to call on a fire department. Why the hell should they be forced to pay for firefighters to put out a fire started by some loser smoking in bed?”

See, Mr. Crocker and the all Republican county commission that he sits on also decided long ago that Fire fighting services provided by local government and paid for by taxes are antithetical to the capitalist ideals of this great nation.  South Fulton instituted a very ingenious program to do away with entitlements like public fire fighting departments supported by burdensome taxation – they came up with the novel concept of fee-based subscription fire fighting services.  And recently we saw patriotism and the American way in its full red, white and blue glory.

It seems that a miserly gentleman decided that he didn’t need to pay the $75 annual subscription price for the services of Obion county Fire Department.  As a result, his home burned to the ground while firefighter stood by, unfortunately unable to help without setting a precedent that could have led to more citizens getting tempted by the evil lure of Socialism.

Here is the local TV report on the matter;

Once again, on behalf of all soldiers in the army against tyranny, I’d like to thank Mayor Crocker, the County Commission and all of the brave firefighters for letting capitalist Darwinism run its course.  Perhaps this will give all those socialist-curious Obamaites pause to reflect on the error of their ways.

For general information and discussion…

We have a whole lot of work cutout for us over the next decade while the disparate political factions, both within the states and at the national level whistle in the wind…

END_OF_DOCUMENT_TOKEN_TO_BE_REPLACED 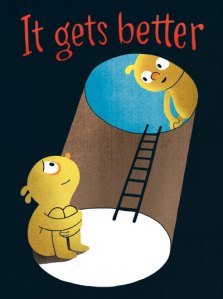 William K. Wolfrum posted in his blog William K. Wolfrum’s Morning — Don’t Panic at Dagblog, a youtube video of Dan Savage and his husband Terry talking to LGBT youth about how things do get better and not to panic.

The video is part of the It Gets Better Project on youtubube that Dan Savage started to help those LGBT youth are struggling with a life made miserable because of the rejection and oppression these youth experience because they are part of the LGBT community.

Dan Savage explained the project in one of his advice columns “Savage Love” on The Stranger website.

I just read about a gay teenager in Indiana—Billy Lucas—who killed himself after being taunted by his classmates. Now his Facebook memorial page is being defaced by people posting homophobic comments. It’s just heartbreaking and sickening. What the hell can we do?

Another gay teenager in another small town has killed himself—hope you’re pleased with yourselves, Tony Perkins and all the other “Christians” out there who oppose anti-bullying programs (and give actual Christians a bad name).

Billy Lucas was just 15 when he hanged himself in a barn on his grandmother’s property. He reportedly endured intense bullying at the hands of his classmates—classmates who called him a fag and told him to kill himself. His mother found his body.

Nine out of 10 gay teenagers experience bullying and harassment at school, and gay teens are four times likelier to attempt suicide. Many LGBT kids who do kill themselves live in rural areas, exurbs, and suburban areas, places with no gay organizations or services for queer kids.

“My heart breaks for the pain and torment you went through, Billy Lucas,” a reader wrote after I posted about Billy Lucas to my blog. “I wish I could have told you that things get better.” END_OF_DOCUMENT_TOKEN_TO_BE_REPLACED